skip to main | skip to sidebar

A Tour of Greg Ragland's Studio and Process

"Rufous in Sage, Red and Orange," by Greg Ragland

Greg Ragland’s studio is bathed in afternoon sunlight and birds. Two walls are lined with his newest paintings, bright squares of color graced with chickadees, geese, quail, a spoonbill, and hummingbirds. Across the room is a large computer monitor where he brings up images of the sculptures he’s working on to install in April at the People’s Portable Garden in Salt Lake, the result of a public art commission he was recently awarded. He pauses for a moment from his busy schedule and talks about the commission, and the upcoming show at Phoenix Gallery, which will feature the newest paintings in his wildlife series.

How do you spend your days?

I wake up every day and I can hardly wait to get to work. I’m either in this room [the studio] or in the shop—I have an oversized shop in the garage—and then lately I’m down at the foundry.

Congratulations on the public art commission. This is an exciting new development in your work.

When I was in grad school, I did mostly sculpture. Painting was my comfort zone. Sculpture I have to think about a bit more, in fact, that’s where my work is headed. The garden is about bringing people together. So one of the projects is called “No Salt, Just Peppers.” [It’s four human-sized bell pepper slices in red, yellow, green, and orange.] The peppers are leaning on each other, which works for the metaphor of the garden, and people depending on each other. There’s also “Three Peas in a Pod,” which is a peapod bench, and toothpicks with cherry tomatoes called “Starters,” which will be installed at the entry to the garden. I’m loving public art because it’s for everyone, everyone can see it and enjoy it. 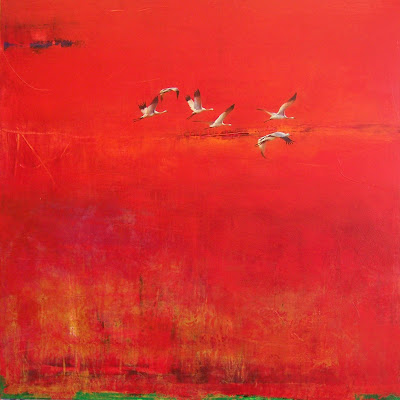 These new paintings are gorgeous. How did the wildlife series initially start?

Before the wildlife series I was doing figurative work. There were people flying and others in contained spaces; and at a certain point the work started to become very esoteric and personal. It was getting to the point where I’d solved all the problems I’d created for that body of work, so I decided I was going to stop painting for awhile. I ended up going for three or four months—which is the longest I’d gone without painting since I was 14. Then one day I was sitting in the yard, and this bird was flying over. And it was beautiful, but I realized the bird wasn’t the most important thing—the background and the bird were in a competition for attention. I’m a huge fan of the color painters, so I decided to take the abstract background, and then shove in this whole other idea: the realistic bird. I wanted to take two completely different philosophies, and make them work together.

Compositionally, the birds give the paintings the freedom to not be grounded. The composition and color are really what I’m interested in. The backgrounds can become anything. I’m falling in love again with just throwing paint, and then reacting to where the paint takes me, to controlling the composition, but not controlling it. The backgrounds take 9/10ths of the time, then I add in the birds last—the bird is just like a little flavor crystal. And it either screws the painting up, or it makes the whole thing.

Where are you headed with this series?

It’s hard to say. I’m still enjoying the process of putting something realistic in there, but I love the backgrounds by themselves. The birds are starting to become not as important as what’s going on in the background. I have a few canvasses that probably won’t be in the show, they don’t have birds, but they feel done. I’m just sitting on them, living with them for a while. I haven’t completely solved all the problems I wanted to with this series, though. 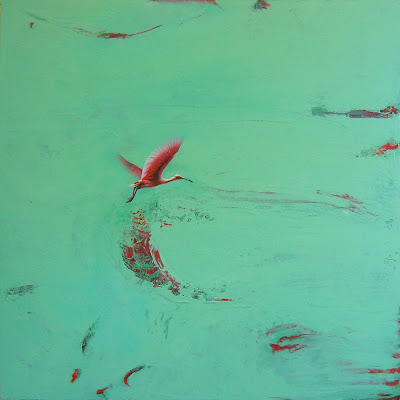 "Spoonbill in Turquoise," by Greg Ragland

When you speak about problems, are these something that you have in your mind before you begin, or do you discover them as you go?

The problems for me are compositions, textures that I can’t physically paint; they have to be totally spontaneous. Although you can’t have too many of those, though, the spontaneous textures. Where the artist comes in is in knowing what to save and what to get rid of. How minimal can it be, and how aggressive can you take it. And letting the paint do its own thing, but also controlling that.

Composition and color are key. I want to control where the viewer exits the painting—or if they stay inside it, I want to predict how they’re viewing the painting. I want to see if I can control the gaze of the viewer. I started the series as squares, because squares, historically, are an absolute no-no, because there’s nothing to solve. The shape is so stable, it doesn’t create an interesting problem, and so you have to create the problem. I took that on as a challenge when I started the series, though I’ve since done a few rectangles and more vertical pieces—but they’re so much easier to solve.

I’m completely lost when I begin a painting, so I like to create problems. When you paint, you’re putting yourself out there; you’re letting yourself be in a sheer panic, and then being vulnerable. I hate to start from scratch. So I’m always setting up puzzles for myself. My grandfather used to make 3-D puzzles—he’d carve them out of wood—and I loved to solve them. I try to do that for myself with my art. 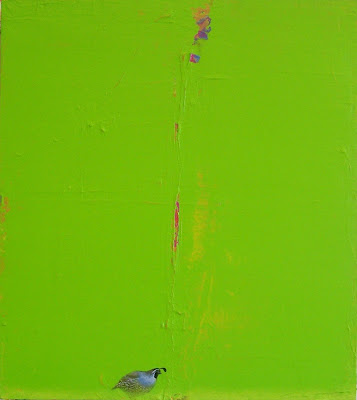 Posted by Phoenix Gallery News at 6:53 PM No comments: